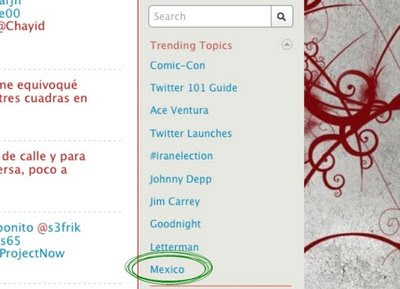 Mexico is now a Trending Topic at Twitter. Why? Because of soccer:

CHICAGO (Reuters) - Mexico beat Costa Rica on penalties in a tense semi-final on Thursday to reach the CONCACAF Gold Cup final where they will play the United States, 2-0 victors over Honduras.

Costa Rica had plenty of chances to get the lead against Mexico, Armando Alonso hit the post in the 12th minute, but Mexico should have been ahead at the break when Giovani Dos Santos headed wide from in front of goal.

Mexico were awarded a penalty in the 58th minute when Costa Rica defender Freddy Fernandez was ruled to have handled the ball but Miguel Sabah's soft penalty was easily saved by Keilor Navas.

The Mexicans looked to have grabbed a fortunate victory when they went ahead in the 88th minute, Guillermo Franco scrambling the ball home, but the celebrations from the large Mexican crowd at Soldier Field proved premature.

In the second minute of injury time Ledezma raced on to a flick on from Alvaro Saborio, ran past the hesitating Mexican defense and rocketed home a fine shot.

Again Costa Rica had the better opportunities in extra-time but with no breakthrough the game was decided by spot kicks -- Ledezma being the only man failing to score.

The forward's well struck penalty was superbly saved by Mexico keeper Guillermo Ochoa and Carlos Vela kept his cool to give the Mexicans a chance at revenge for their loss to the United States in the final two years ago.

Sunday's final will be held at Giants Stadium in New York. (Reporting by Simon Evans in Miami; Editing by Greg Stutchbury and Peter Rutherford) 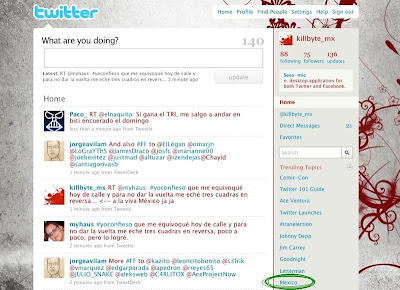 Excellent post. I’m actually surprised the use of blogs and wikis isn’t higher.