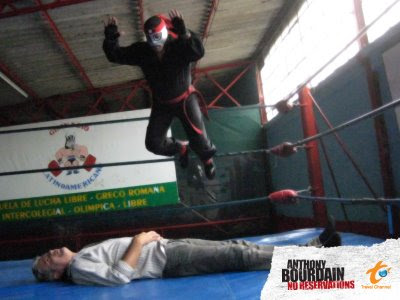 Anthony Bourdain starts the 5th season of his TV show called "No Reservations" (on Travel Channel)  with a trip to Mexico:

Tony heads to Mexico with Carlos,who took over Tony's old job as head chef at Les Halles. Carlos is one of many Mexicans who have crossed the border to achieve the American dream. Carlos gives Tony a tour of his hometown of Puebla and nearby Mexico City.

In these videos you would see Tony Bourdain get really drunk, first at a Mexico City's "Cantina" (traditional Bar) and then at a "Pulquería" (low class bar) with a beverage called "Pulque", which is prepared with plants fermented with dog droppings (believe me, it is true, they take poo and put it in a handkerchief, add water, plants and let it ferment). He also drinks a spirit called "aguardiente" (literally meaning "burning water") which is like a mexican version of moonshine. He also eats some tacos at the street and tries home made food at a "fonda" (traditional restaurant for the working class) and at Carlos' home in Puebla. Finally he visits the "plaza de toros" in Puebla, where he watches a bull fighting event. Oh, I almost forgot, he also wrestled with a "luchador" (mexican wrestler) at a local arena.
Here are the videos (5) from Youtube:
I have to say that Tony is very brave, I had tried "pulque" and I couldn't finish a full glass, sometimes "pulque" is so thick that you need scissors or a knife to cut the thread. Hope you like the vids and find them interesting, just please never try this at home, never.
Posted by Myhaus at 1:04 AM

I know the placed called Huamantla, it's a cozy place to be there, if you wanna get there you may arrive by the first week of August they have "Feria" and some other nice activities. The main day of the Feria is on August 14th, the day of the Virgin Maria de la Caridad. On the night before the 14th of August they put some sawdust crafts on the street for further information get in here.
The bullfighting on the Streets is on the 3rd Saturday of August.
More information about the activities here.
C-U