Special report of a New Yorker who visited Mexico City for the 2008 Aids Conference. 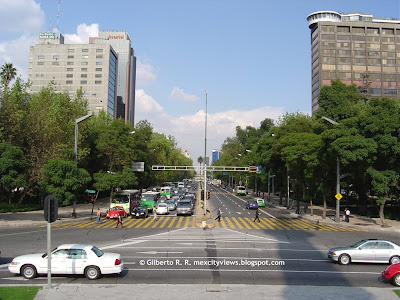 Photo of Reforma Avenue taken from the Angel Statue, Mexico City
In a previous post I gave some advice for foreign visitors coming to the 2008 Aids Conference in Mexico City and one of those visitors, Shawn M. from New York, wrote an incredible report about his experience at Mexico City:

"Before my trip to Mexico City for the 2008 International AIDS Conference, I must admit I had some negative expectations of my visit. As an uninformed American who has never visited, I only heard of the negative aspects of Mexico---kidnappings, drug cartels, extreme poverty, corrupt police, and so on. This was compounded due to the fact I would be traveling to the conference alone (and staying in a "budget" hotel, the Hotel Fontan).

My flight was delayed out of Dallas to Monterrey, which forced the airline to board myself and 4-5 other passengers in a hotel for the evening and catch a morning flight to Mexico City. Even worse, the airline lost my poster tube containing the poster I was to display at the conference, which I had checked as a 2nd luggage piece. These things happen, I guess! So it took me 2 hours and lots of inquiries at different offices to finally find my poster tube at the airport in Mexico City. My pre-paid shuttle service from the airport waited for me during this time, with no complaints or problems. I was very grateful for that, to say the least. When I tried to check into my hotel, the concierge could not find my reservation for almost 30 minutes, until a manager came along and resolved the problem. The floor I was on was under construction, which I had somewhat expected, having read reviews of Fontan to that effect. My room was very basic---again, this did not surprise me since I only paid $46/night. Besides, I was there for work and didn't need anything fancy anyway. The staff at Fontan were great, and offered very friendly service. The breakfast buffet was good too----offering a wide variety of foods each morning. The only negative though was me getting locked INSIDE my hotel room by a jammed door that would not open! It took the night manager and a maintenance worker over an hour to get the door open, but I took it all in stride. After all, that's why they're renovating, right?!

Now, enough of these "negative" experiences and onto the city itself. I expected to see a lot more impoverished Mexicans in the streets than I actually encountered. My first impression was, "Wow, this city is a lot more cosmopolitan than I expected!" This is coming from someone who lives in New York, so I consider myself an urban dweller and fully understand the advantages and disadvantages of urban living. I did see some questionable neighborhoods on my way from the airport to my hotel, but my neighborhood (Avenue de la Reforma, near Hidalgo Metro Station) felt safe to walk around and explore.

I met some other conference delegates at my hotel, who I went out with and explored the neighborhood. We ate at a decent restaurant (the name escapes me), and even had some street food as well, which was absolutely delicious and dirt cheap. I had 5 tacos for 15 pesos, which is about $1.50 US. There's a similar eatery in the Spanish Harlem (El Barrio) neighborhood of New York that sold mini tacos for $2 apiece, so the price difference was great. I absolutely love authentic Mexican food, and was happy to eat at different places throughout the trip. I even had enchiladas with a mole sauce from a 7-11 near my hotel and even THAT was good! I was also pleased that cigarettes were only 25 pesos ($2.50/pack) and Coronas were 7.50 (about 75 cents US) each. As someone who went to Mexico City on a budget, I was pleased that I didn't have to spend much for things like food, taxis, riding the subway, and yes, even cigarettes and beer.

Traffic to and from the conference was terrible. It took a minimum of 1 hour to get to Centro Banamex from Hotel Fontan. It was actually a wiser choice to catch the 2 train from Hildago to Panteones Station and then take a conference shuttle rather than take a taxi the whole way. That's what I did most of the time. When I wasn't at the conference, I usually spent time at my Hotel or at a local internet cafe across the street, where I went online to check my email and browse the web for a much cheaper rate than the internet prices that Fontan was offering. Hotel Fontan offered 24 hours of access for $11/day, which I thought was a complete ripoff. The internet cafe was only 20 pesos for one hour, and since I only needed about an hour every other day to go online, that was a much better deal. It was strange though---almost like being in a mechanic's garage (no doors, completely visible to the street) and checking my email on very old computers. But the internet speeds were great, and some PCs even had Firefox installed on them (a sure sign that someone knows what they're doing).

I am gay, so I HAD to check out Zona Rosa, even if I was by myself. I didn't stray from Reforma too far, but was able to find a great corner bar called Papi's Fun Bar near the Angel statue, about one or two blocks off of Reforma. Since I don't speak Spanish (or very little of it anyway), I walked up to anyone who was speaking English and introduced myself. There were a great mix of locals, conference delegates, and even a few expats at this bar. The music was great, the crowds were friendly and open, and the drinks were cheap. I was surprised by how openly gay the bars in Zona Rosa were, given that Mexico City is a Catholic country. But then again, I read before my visit that Mexico has taken great strides to be more gay friendly, and there was no evidence here to the contrary. I also noticed the locals in Zona Rosa and the surrounding area were very good dressers, again attesting to the cosmopolitan impression I had when first arriving. I also noticed a lot of women with very young children out on street corners selling candy and other personal effects, especially in Zona Rosa, so I suppose this is a prime area for panhandling and getting income from tourists.

I stayed out until 4am one night at Papi's Fun Bar, hanging out with delegates and two Mexican locals I met there. It was a great time. Walking home from Papi's took about 20 minutes, but it didn't seem threatening, even that late at night. I noted the city's traffic levels were much lower than during the day, yet still pretty busy. And there were dozens of moped drivers gearing up to deliver the day's newspapers, all zipping off into the night after stacking papers on their bikes, which I was happy to witness.

All in all, I left with a very different impression of Mexico City, and vowed to return on my own time for more touring and exploration. I never got the chance to visit Zocalo Square, which I regret. I never made it to the Pyramids, either, or the Archeological Museum. There's tons I would have liked to have seen, but I attended the conference every day and didn't get back to my hotel until around 7 or 8 each night.

If you're wondering about the conference as well, let me just say it was amazing. It was my first AIDS conference, and as a young researcher I was happy to have the opportunity to attend and present a project there. At first, it was a little overwhelming, finding my way to the Centro Banamex, checking in, and so on. The sheer size of it all was daunting. I've heard estimates of 22,000 attendees this year. Needless to say, there was tons to see and do!

I'm thankful to have visited Mexico City, and will definitely visit again. It's a beautiful city. I'm know it has its problems, but don't let that scare you from visiting! I think next time though, I'll splurge on a better hotel :) "

I want to thank my firs guest writer, Shawn M. for his great feedback. I hope this report encourage more people to visit my home town, Mexico City.
Posted by Myhaus at 7:54 PM

I did visit Mexico City several years ago and like it. Other than altitude sickness for a few days, I didn't have any problems. But I did not feel safe going out at night, so stayed in the hotel. I saw the Archeological museum which was spectacular and the zocolo which had some sort of festival going on at the time. The cathedral was also great.

Thanks for your comment. Mexico is a great place to visit. As any big city in the World it could be a little dangerous at night but it is a matter of luck and following some safety guidelines. Mexico City has a great night life, your should return some time and enjoy the city at night.

My partner and I just returned from Mexico City yesterday after a 2 week stay. What a wonderful experience! We stayed about 2 blocks from Papi Fun Bar...alas it has been closed...along with several other gay and non-gay establishments...something about violations. Anyway, I hope you get to go back to experience more of the city. We were able to tour Teotihuacan and the pyramids, Xochimilco and the flatboats and just about every major part of the city. I'm glad you loved it...we sure did!