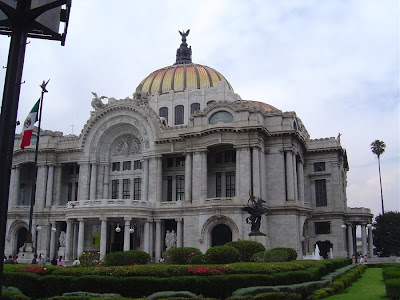 Palacio de Bellas Artes ("Palace of Fine Arts") is the premier opera house of Mexico City. The building is famous for both its extravagant Beaux Arts exterior in imported Italian Carrara's white marble and its murals by Diego Rivera, Rufino Tamayo, David Alfaro Siqueiros, and José Clemente Orozco.
During the late 19th century and the first years of the 20th century, during Porfirio Díaz's 30-year rule of Mexico, there was a marked tendency to imitate European art, styles and customs. Following this tendency, a new Teatro Nacional (National Theater) was planned and the construction of the new building began on October 1, 1904. The plans were created by the Italian architect Adamo Boari, using state-of-the-art technology as was common in European theaters.
Construction was originally scheduled to be finished by 1908; however, it was delayed by problems with Mexico City's soil, which is muddy and led to the gradual subsidence of the building. The construction site was chosen by President Porfirio Díaz because it was located downtown, on an elegant park, and face-to-face with the then tallest buildings in the city (Torre Latinoamericana) , but the choice was not so appropriate since the weight of the building is so massive that it has been sinking a few centimeters every year since the completion of its construction.
Things got a little more complicated with the beginning of the Mexican Revolution in 1910. Boari left Mexico in 1916 and construction was virtually stopped until 1932, when works were resumed under Mexican architect Federico Mariscal. Completion took place in 1934 but the square with gardens and pegasus statues, devised by Boari, was not completed until 1994.
Interesting info:

Diego Rivera's "Man at the Crossroads" mural was originally painted for the Rockefeller Center in New York City. Rivera had finished two thirds of the mural when the Rockefellers objected to an image of Lenin in the mural. When Rivera refused to remove Lenin, his commission was canceled and the mural was destroyed. Rivera, in response, repainted the mural in a smaller scale at the Palacio de Bellas Artes in 1934 and renamed it "Man, Controller of the Universe".