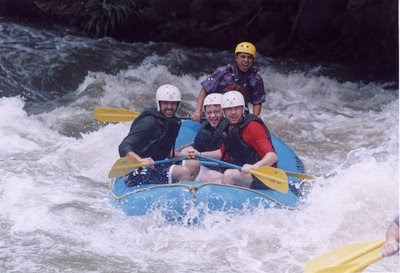 If you are looking for some adventure in Mexico I could recommend you Veracruz as a great destination for ecotourism. Definitely one of the most adventurous trips in my life, rafting in level 3-4 rapids was quite thrilling (you could see me screaming in the image above, I am the one in the middle with white helmet).

Some History:
The city of Veracruz is a major port city and municipality on the Gulf of Mexico in the Mexican state of Veracruz. The metropolitan area is Mexico's First largest City on the Gulf coast (after Veracruz Tampico and Ciudad del Carmen) and an important port on Mexico's east coast. It is located 105 km (65 mi.) along Federal Highway 140 from the state capital Xalapa, and is the state's most populous city, with a population of 444,438 in the city and 512,310 in the municipality, according to the 2005 census. It is often referred to as "Puerto de Veracruz" to distinguish it from the state. The people of Veracruz are known as Jarochos. It is also referred as the Four Times Heroic City after resisting various invasions, two from France (the Pastry War and the French intervention in Mexico) and two from the USA, (the Siege of Veracruz and the 1914 US occupation).

Some Culture:
The city is known for its rich traditions of music, including marimba bands, danzón and comparsa. A special kind of music called son jarocho, a mix of Mexican folk music and Cuban son, was developed in southern Veracruz state, in and around Veracruz, Veracruz. La Bamba is the most famous example of son jarocho. An equally rich dance tradition parallels Veracruz's unique musical styles.
In downtown Veracruz, a large marble-tiled zócalo, called the Plaza de Armas or Plaza Lerdo, is the heart of the city's lively nightlife. It is lined with arcades that house bars and cafes. On a nearly nightly basis large groups of people sit outside in the plaza enjoying food, drinks and cigars, while they watch musicians and dancers that perform in the square. Veracruz's 18th century cathedral and 17th century Palacio Municipal are also located on the plaza.
The yearly Carnaval festival in Veracruz, a nine-day party in February or March, is the most spectacular festival of its kind, and it's also the oldest organized Carnaval in Mexico. The city also celebrates a yearly Afrocaribeño festival in July. These festivities illustrate the fact that the city is in many ways more connected to Caribbean culture than that of inland Mexico.
The "Malecón" harborfront walk along the docks draws many tourists, more from within Mexico than foreigners. The city has several beaches as well, like Villa del Mar and Mocambo. 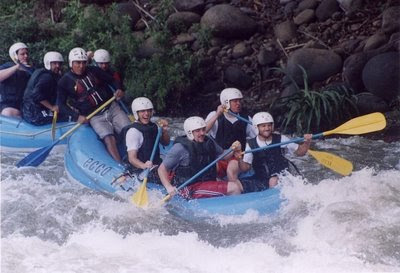 Ecotourism:
Ecotourism in Veracruz is very popular, there are a lot of adventure travel agencies with a lot of different activities. I would like to share what I experienced during my trip to Veracruz. Six friends and I went to Veracruz by car from Mexico City and stayed at a local hotel (more like apartments, suites). We booked the eco-adventure package from Mexico City, and signed up for a one day visit with three activities: rafting, zip-lining and cliff-hanging.

The adventure began at a little town called Jalcomulco (we actually drove there but there is specialized transportation that will take you from Veracruz to Jalcomulco as part of your tour), where we arrived in the morning and got to "La Villa" Hotel, local headquarters of Ecco Sports (the adventure travel agency we booked). The guides gave us a crash course about the safety equipment and about security guidelines (what to do in case of an accident, wich I had) and explained us what was the plan for the day.

Rafting:
A van took us some miles up the valley and left us at the river bank where the rafts were, we put on the vests, helmets and took the paddles. We were separated in to two rafts, two friends and I in one and 4 more friends in the other one, also with one guide in each raft (see picture above). One of the guides told us that it was raining season (April-May) and that the river was very wild, with level 3-4 rapids. It was an unforgettable experience, at the beginning things were very calmed but I was feeling the adrenaline build up until we got to the first set of rapids, the guide was directing our paddling and everything went well except for a wild rapid where I fell into the water, thank god I was using a helmet and vest because I felt a lot of rocks hitting my body and head. I survived but after a while my knee was hurting like hell, and hurt for days. Ten or fifteen minutes later we got to very calm water, with a lot of caves, where we stopped and got out of the raft and into the water, we swam for a while and tried diving from the rocks above. After the break we continued our journey downstream and paddled through more rapids, in the way we saw some tramps (made with wood sticks) that locals use to fish shrimp. After a while we got to another riverbank where we got out of the water and carried the raft to the shore (and there was the moment when I felt the pain in my knee caused by the weight of my body out of the water). We left the raft and safety equipment there and walked back to the hotel (about quart of a mile from the river bank). The original plan was trail biking to the zip-lining site ,but we wanted to get there fast so there will be enough time left for cliff-hanging, so we drove there by car. 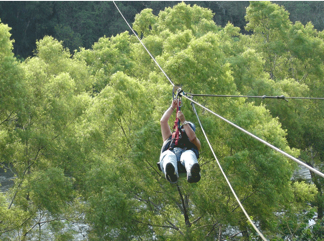 Zip-lining:
A zip-line (also known as tyrolean crossing) consists of a pulley suspended on a cable mounted on an incline. They are designed to enable a user propelled by gravity to traverse from the top to the bottom of the inclined cable, usually made of stainless steel, by holding on or attaching to the freely moving pulley. Ecco-Sports have two different zip-line sites, one is the "Tirolesa de Río" with four stations, two crossing the river (see picture above); and the "Tirolesa de los mangos" with 6 stations crossing a little forest of mango trees. Getting to the first station (we chose the Mango trees route) was a little tricky for me because of my hurt knee but once I was hanging on the cable everything got easier. It is a thrilling experience, with great views and a powerful feeling of freedom.

Cliff-Hanging (or rappel):
Nearby the zip-line site there is a cliff where my friends got equipped and ready for the descent (I couldn't join them because of my injured knee). The descent by rope is at a natural rock wall with a height of 45 meters (about 150 feet). Even though this activity seems very dangerous it is in fact very safe, guides are very experimented and keep you safe with a safety rope in case you fall. My friends told me that it was a very exiting experience with a a great view of the forest. 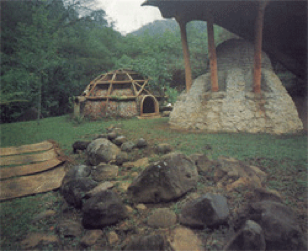 There are a lot of activities at Ecco Sports like the three already mentioned and others like hiking, trail biking, and the "Temazcal" (see picture above). The Temazcal has its origin in Mexico's ancient history, and its name derived from the Nahuatl word "temazcalli" which means "the bath house". It could be constructed with adobe, volcanic rocks or even with tree branches and animal fur. It represents the four elements (earth, water, wind and fire) and has a rounded form that also represents infinity or mother earth's womb. Hot rocks are placed in a hole at the middle of the temazcal and water with herbs is added, creating pleasant and relaxing vapors (like a sauna) inside. People gather around the center of the temzacal and participate in the relaxing experience. There are temazcales (plural of temazcal) where a spiritual ritual takes place and tries to establish an intimate contact with Earth and Nature. If you are interested in ancient rituals and culture, joining a Temazcal is very advisable.

Besides ecotourism there are a lot of places to visit in Veracruz. Local beaches are not as beautiful as beaches in Acapulco or Cancun principally because they are very rocky. For tourists I will recommend the beach called "Mocambo" where all the big hotels are, it is a very exclusive and beautiful beach. Other interesting sites are "La Plaza de Armas" (where you could find the 18th century Cathedral), "el Malecón" (harbor front walking path) and the most famous coffeehouse in Veracruz, the "Café de la Parroquia" where you could taste the traditional "lechero" which consists of expresso coffee mixed (at your table) with steamed milk.

If you have any doubts or need information please leave a comment below (also if you have visited Veracruz please tell us how it went).

hey thanks so much for advertising on my site through entercard,
adrian
Blogging For Starters

that was owesome. it looks so great.
I've only done rafting once so far, but the river is not as wild as that :)

It was a great experience, even with my knee hurt I had a great trip. The photos of everyone screaming in the rafts talk by themselves.

Your blog is very much good. I am very much impressed by your blog content; I also come across number of sites, you can also check these are also very much useful for everyone.